How to Get Moist Cakes Every Time 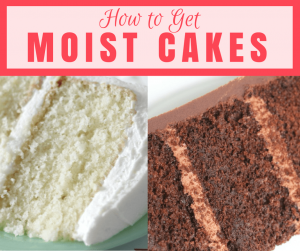 How to Get Moist Cakes Every time

TIP 1: Make Sure your Butter is Real:

If your recipe calls for butter, make sure it’s room temperature and not too warm. Also, I ask the question ‘is it real butter’ because a lot of people buy the margarine sticks thinking its butter because it says ‘great for baking’ on the box. No, no, no…just pay a few extra dollars and get real butter.

Margarine has too much water content in it and it’s just going to throw off the texture of your cake. Use real butter, I promise it’s worth it.

TIP 2: Are you using too much Flour:

Take one smaller measuring cup, and use that as a scoop, then transfer to the larger measuring cup by spooning it in. Or just use a large tablespoon and spoon out the flour into the measuring cup. Then level off the top if you need to. Doing it this way assures that you won’t be adding unnecessary flour to your cake batter.

Using the egg yolks will keep the cake from being a completely white cake, so you just kind of have to weigh your pros and cons there. If you’ve got a recipe that calls for egg whites only, you can halve the amount and use whole eggs. Basically, if it calls for six egg whites, use three whole eggs and vice versa.

Now, that won’t work in all cake recipes. For example, a recipe that calls for you to whip the egg whites until stiff and then fold them into the batter…well, it’s not going to work to use the whole eggs instead. Use your best judgement on this.

Vanilla cakes seem the hardest to keep moist and you’ve got to really watch the baking time on those. I tend to pull them out of the oven, a couple minutes before I think will be just right.

Scratch cakes aren’t like cake mix cakes. You can’t dump it all in a bowl and it come out fine. It won’t work that way.

Cake recipes have different mixing methods for a reason. There’s actually some science behind it and you get different results with different ingredients that you mix up in different ways. (Okay, maybe that sounded a bit confusing.)

The next thing is that you don’t want to mix scratch cake batter until it’s completely smooth. If you over-mix the batter, it will change the consistency. You could get a flat cake, a gummy cake, a cake that’s got glue-like streaks in it or a cake that’s compact and too dense.

It’s not always something you’ve done. It could actually be the recipe. I caution you not to blame it on the recipe straight off though. Scratch cakes can be finicky, so really look into how you measured, if you forgot any ingredients, do you think you might have over-mixed it, or mixed it differently than the recipe called for?

Don’t just automatically assume it’s the recipe right off the bat. If you think back and you know you were extra careful to follow the instructions to a ‘t’ and you didn’t substitute anything, then you might have a recipe that just doesn’t work for you.